skip to main | skip to sidebar

Wasted Youth - Flush the bouncers live in the early 80's.


Early 80's footage of this legendary L.A. Hardcore-Punk band, Wasted Youth.
Posted by Forgotten Youth at 2:16 AM No comments:

The Panty Sniffers: SSR music video from 2005. Uploaded again because the original was taken down and had around 70,000 views aprox. Puerto Rico Skate Hardcore Punk!!!
Posted by Forgotten Youth at 3:51 PM No comments:

Filmage: The Story of the Descendents/ALL Teaser 2


FILMAGE Teaser 2 from Deedle LaCour on Vimeo.
Posted by Forgotten Youth at 3:58 PM No comments:

Shame: A film by Steve McQueen

Shame is the second feature film by British director Steven McQueen. The lead character, Brandon Sullivan, is portrayed by German actor, Michael Fassbender (also in A Dangerous Method this year), his sister Sissy Sullivan by Drive's Carey Mulligan and his boss David Fisher by Rubicon's James Badge Dale. The film received a NC-17 rating because of the explicit sexual content.

Fassbender's performance is groundbreaking and over the top. Mulligan's support acting is marvelous and compelling. The director creates an atmosphere of loneliness, desperation and hopelessness that captivates even the most difficult audience member. Aside of all full frontal nudity in some of the characters, the movie is much more than a softcore Cinemax-type. It explores human relationships between siblings of difficult upbringings, the two sides of the candy-coated corporate world, perverted lewd conduct and how humans react to sudden change of their routines.

McQueen has done a great job with his second effort. Michael Fassbender and Carey Mulligan, with back-to-back great performances in 2011-2012, are becoming Europe's new promises for the indie film making movement. 8 stars out of 10.
Posted by Forgotten Youth at 12:04 AM No comments: 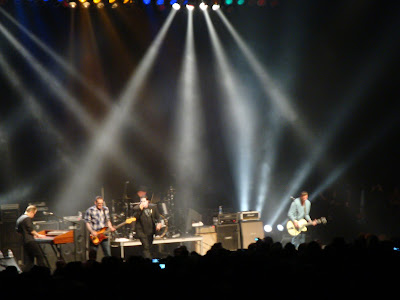 The first act was a lousy band called A Pretty Mess. Female-led generic punk that left everyone wanting the headliners as soon as possible. The second worse thing, aside of this, was hearing a Ramones-only soundtrack between bands. A lack of variety that reminded us that definitely, the best was yet to come.

Mystic Records 80s outfit, The Grim, hit the stage for their blend of hardcore surf punk that set the tone for the rest of the night. Fast songs with potent guitar riffs that initiated circle pitters to wreck shit up. Things to highlight were the tallest bass player ever and the lead singer throwing out their entire merch to the crowd.

Sin 34, the female-fronted 80s hc band, came next. Led by singer Julie Lanfeld and drummer Dave Markey (from We Got Power Films fame), they blasted songs from their classic "Do You Feel Safe". It was so good to hear live, a sort of underrated band from that era. 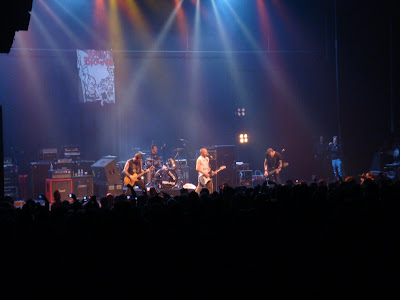 After this, arrived one of the main dishes of the feast, Youth Brigade. 2/3 of The Stern Bros, Shawn and Mark, accompanied by two young guns to play all their classics. "Blown Away", "Modest Proposal", "Men in Blue", "Fight to Unite", "Violence" and they ended their set with singalong classic "Sink with Kalifornja"(in the latter, the remaining Stern brother Adam as well as producer Gary Tovar, join them on stage for the encore).

The main reason for our attendance, TSOL, brought mayhem to the stage with their presence. Lead singer Jack Grisham with a full-face of make up and a suit joined by the other original members: guitar extraordinaire Ron Emory and pounding bass player Mike Roche. Keyboard-player (Greg Kuehn) included, they passed through their classic discography with great taste. Fast punky stuff like "Superficial Love", "World War 3" and "Abolish Government" and horror punk anthems as "Sounds of Laughter", "Silent Scream" and "Wash Away" kick some major ass. Grisham's witty and irreverent talk between songs stand them out as great punkrock performers, a thing musicians in general lack. Their classic necrophiliac tune "Code Blue" ended their round set like a bomb. 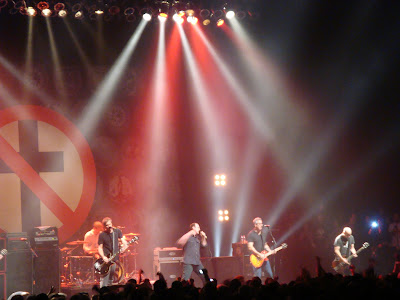 Bad Religion closed the fest with an hour-long wall of sound full of their 3 decades repertoire. "Fuck Armageddon, This is Hell", "Do What You Want", "You Are the Government" heated up thousands of kids, old timers and walk ins. Their 3 guitar attack of Hetson (Circle Jerks), Baker (Minor Threat) and Gurewitz (Epitaph Records) was outstanding. Graffin (UCLA professor) and Bentley (original bassist) completed the full five-man front row performance. Songs like "I want to conquer the World", "Modern Man" and "Supersonic" continued the singalong extravaganza. Finally, to time travel to the eighties decade, they played never-before stuff from their first album. This was a great way to end this show because it completely fulfilled the purpose of showing the attendees how was punk rock back in the day. As Gary Tovar said: "Don't ever underestimate the power of Bad Religion".

Post Scriptum: This fest started on Friday with X, Adolescents and Social D. and ends on Sunday with Descendents, Dickies and Vandals.
Posted by Forgotten Youth at 11:03 PM No comments:

A Dangerous Method by David Cronenberg 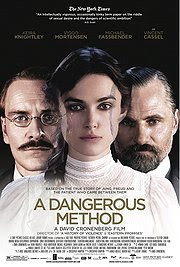 Legendary canadian auteur filmmaker, David Cronenberg, delivers his latest cinematic effort A Dangerous Method after four years apart from motion pictures. A film that goes back to the birth of psychoanalysis and its pioneers Sigmund Freud and Carl Jung. Starring are Viggo Mortensen as Freud, Michael Fassbender as Jung, Keira Knightley as Sabina Spielrein and Vincent Cassel as Otto Gross.

Jung, a Swiss Christian, and Freud, an Austrian Jew, were psychologists who disagreed over the way patients should be treated and this gave birth to Psychoanalysis. Everything Freud did was from a sexual perspective. Jung was more ortodox by helping patients recover to be functional beings. Jung began treating Sabina, a hysteric russian woman who was molested by her father, that her intelligence allowed her to become a doctor. After several months of treatment, Jung and Sabina began a sadomasochistic affair which eventually "cured" her. Jung ended up using extramarital sex as an escape to his boring married life. Freud hardly convinced the status-quo that his theories would play an important part in the study of human behavior.

At the end, this two important social scientists were nullify by the World Wars that later arrived. Freud ended up committing an assisted suicide, while being in exile in England, in the verge of World War II. Jung died tormented and hopeless in the 1960s.

The performances in this film were brilliant. Keira Knightley made a great performance as the hysteric Sabina Spielrein and Viggo Mortensen made a very credible Freud personification, smoking tobacco and a jewish-nose included. The scenery was beautiful and served as background to the early 20th century setting. Cronenberg added another good film to his prolific and versatile repertoire. If "A history of Violence" and "Eastern Promises" (in both films Mortensen was the lead) were violent and gory as his earlier work, this witty flick puts him in the list of the greatest North American auteur filmmakers without a doubt. 8/10 stars.
Posted by Forgotten Youth at 7:35 PM No comments: 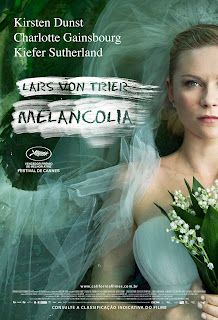 The story evolves around Justine (Dunst) who is getting married to Michael (Skarsgard), in a larger-than-life wedding paid by her wealthy brother-in-law John (Sutherland), who is married to Justine's sister Claire (Gainsbourg). Justine's relationship with Claire is not the best. Also their parents, Gaby (Rampling) and Dexter (Hurt), hate each other. After several events during wedding day, Justine ends up living at her sister's mansion. They wait there for Melancholia, a strange planet about to collide with Earth, and everything will change forever.

Lars von Trier tells the story in two different parts. 1st part is Justine's wedding day and 2nd part is Claire's family life at the mansion. Both of them are part of the end of the world story of Melancholia hitting planet Earth.

The camera shots are very reminiscent of his Dogme 95 days. They follow the characters with no apparent purpose as the actors wander through the gorgeous and iconic settings. As the story comes to an end, all the shots made perfect sense. The photography and editing are very interesting as well as strange, but serve the purpose of telling the unconventional story, just as prior's von Trier films.

Dunst performance is her best seen so far. She won the Best Actress Award at the 64th Cannes Film Festival. She also sounds for at least, an Oscar nomination. This isn't for baring all her clothes but for the dramatic scenes that compose her interpretation of a depressed and confused Justine.

During Cannes last edition, von Trier made some politically incorrect comments about sympathizing with Hitler, something that made him "persona non grata" at the prestigious festival and banned him from competition.

All in all, its very good storytelling about the end of the world told by the best Scandinavian filmmaker of the last 20 years. Entertaining, unique and somewhat controversial. 8/10 stars.
Posted by Forgotten Youth at 3:03 PM No comments:

Filmage: The Story of the DESCENDENTS

Very stoked for a documentary about the DESCENDENTS.

Posted by Forgotten Youth at 8:20 PM No comments: 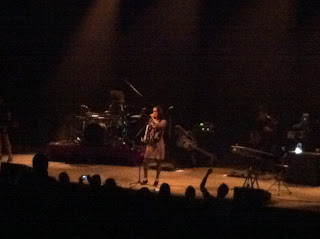 Mexican indie pop icon, Julieta Venegas, played at the Rabobank Arena in Bakersfield, CA. We made a 2 hour road trip from Los Angeles with our good friends Carlos and Zoey to watch some catchy pop tunes sung in Spanish.

We arrived at 8:00 pm to the venue where Korn (actually, they hail from this city) launched there 2006 World Tour [sounds random but we acknowledge it because they had a commemorative plaque outside the venue].

This convention center had several events at the same time (like Disney on Ice) but our venue was a medium-sized theater with seats. It was kind of empty but Julieta's performance was well worth it. She was accompanied by 6 all-around musicians (two kick ass chicks included) who changed guitars, keyboards, trumpets and other instruments between themselves.

They delivered a very warm and intimate set which reminded me of Belle and Sebastian's DC gig back in Oct 2010. The comparison came to my mind because it was a lot of musicians and instruments on-stage delivering beautiful music. The difference was that it was done with a very mexican flavor to it. In addition, the drummer played with only one stick during the entire set, which was very cool. The interaction between the band and the public was very good.

Julieta sang hits such as Canciones de Amor, Eres para mí (in which she rapped Anita Tijoux's verses), Lento, Amores Perros Me Van A Matar (from the classic Iñarritu film soundtrack), Debajo de mi lengua, Me Voy, Ya Conocerán (which she announced will have a music video soon), Algo Está Cambiando and a cover of La Jaula de Oro by Los Tigres del Norte.

After an hour and a half, the band left the stage but returned to sang their last three songs Revolución, Sin Documentos and Andar Conmigo. Overall it was a great show, full of her hits. Even though it was a very small audience, Julieta and his backing band played with tons of energy. Definitely would see Julieta Venegas again but never going back to Korn's hometown.
Posted by Forgotten Youth at 11:29 PM No comments:

Blogs You Should Visit

Sites You Should Have Visited Already

Interviews and Articles published in the now defunct Stepdownpr.com RedRum #1: Includes articles about Hip Hop in Sevilla and The History of the youth subcultures, movie reviews, interviews, concert reviews and much more.

FYFZ#8-V/A-This is Riohondo, Not Spain with 11 bands and 21 songs from punk bands from that Puerto Rican town.